Skip to content
Lift the Lid, BIG Hugs, and The School in a Cart

This Christmas we visited The School in a Cart in Manila, the Philippines. My husband Jonas and our two boys were there, along with longterm supporters of Lift the Lid Connie and her daughter Michele. There were Filipino college volunteers, along with a few of the moms, who helped with the cooking. We met Director Nonie, Music Teacher Allen, and Principal (endearingly called “brother”) Alfredo. What a whirlwind of joy and love, spending time with the children, especially the 34 “regulars” who celebrated with us Dec. 24th. We played game after game, they performed dances, the band played, we all sang, and I’ve never received so many hugs. 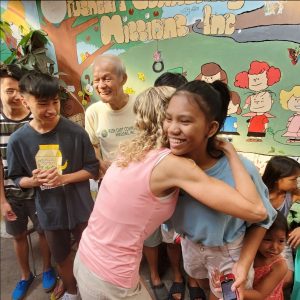 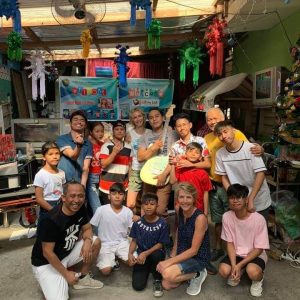 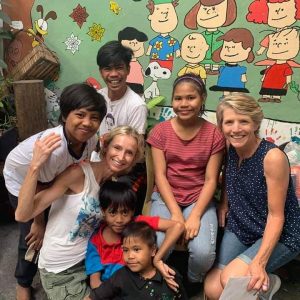 The Center shares space in an alleyway with a scrap-collector. Outside is a tiny dime store, random old tires, one of which held two abandoned kittens, and a single tree, which looks a lot like the Giving Tree. Inside, rough concrete and corrugated plastic shone with sunrays that managed their way inside. The Snoopy and Peanuts mural seemed to come to life, and brightly-colored lanterns hanging from the ceiling swayed as if laughing with us. It was a successful trip for which we raised $9,953. (All flight/hotel/meals/and any other expenses were paid for privately.)

Not once did I see the children cry. Not for a scrape, not for attention, feeling tired or hungry. It didn’t occur to me until returning to Connecticut, that the kids don’t tend to cry because more often than not, no one responds. Other problems are more urgent. They have too many siblings. Parents are too tired, not around, or not in the right mind. But I also noticed the children’s JOY. It bubbled out of them, unstoppable.

Every post, letter and student essay I send out shows the work of your donations. In 2019, we gave a total of $18,769 to the five schools we support. I can’t celebrate enough your work in the children’s lives and how it comes through in their hopes and accomplishments. That said, we’ve never shied away from the sometimes brutal reality our kids face: murder, drug overdoes, arranged marriages, female genital mutilation, rape, and incest. At times, education feels like the easy challenge we take on. Still, toward the end of our visit, while handing out academic achievement awards, we knew it was all worth it. With three in college and three more hopeful to attend next year, we’re crushing that poverty cycle.

If you haven’t had the chance to give, please consider making a donation to cover our basic costs and to build our scholarship fund. Thank you! 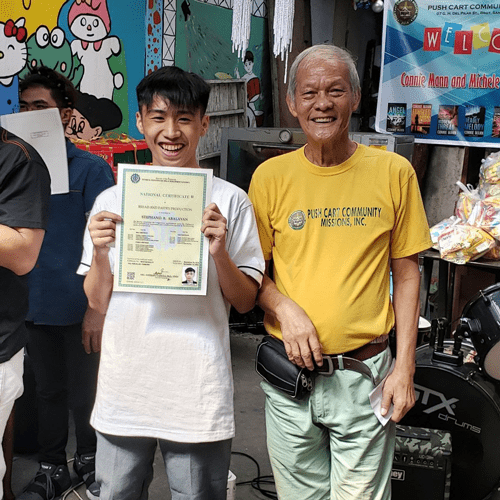