Skip to content
Music!, by Dianne Farinas and Michael Villarmor 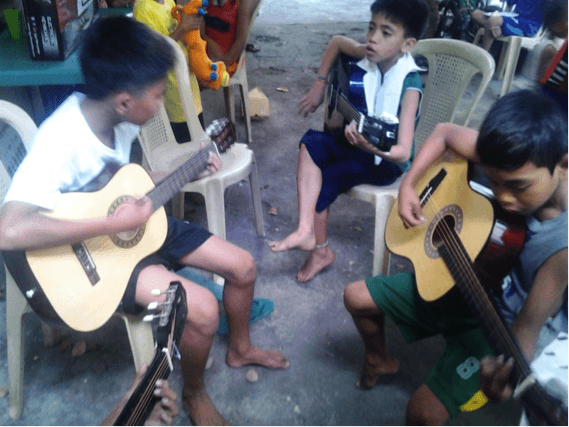 Lift the Lid and The School in a Cart in Cubao, the Philippines are grateful for the anonymous donation which will be used to further expand The School in a Cart’s Music Program. The students have written essays expressing their hopes for the instruments. We would like to share Dianne and Michael’s essays to show our tremendous appreciation.

Dianne Farinas writes (translated from Tagalog): “I like to learn to play the piano (keyboard) because its sound is good and pleasing to the ears. I want Kuya Iddo (big brother Alfredo) to teach me to play.  I like to join a contest held by Channel 2 and if I won I would be like Teacher Nonie. Even if Teacher Nonie gets tired he continues  teaching so I will listen to him and Kuya Iddo.”

Michael Villarmor writes (translated from Tagalog): “I like guitar and piano (keyboard) because the sound is nice.”

Michael is seven years old and is in first grade. He participated in The School in a Cart’s Breakfast Program from 2013-2014. Unfortunately, he stopped school because his father did not encourage him to go. He and his brother Angelo were taken to Boys Town where they could continue their schooling, but they ran away claiming they were being beaten up by the older boys.

Principal Alfredo was happy to see them at The School in a Cart on a recent Saturday, and Michael wrote a little about the ‘Music School in a Cart.’ Hopefully, the instruments will entice them to visit the Cart more often and will keep them off the streets. The primary goal of The School in a Cart is to feed, bathe, clothe, and educate the street kids in order to support them in going to school.

Again, we thank the anonymous donor, and all our donors, for their faith in the street children of Cubao.